We won a NetflixOSS Cloud Prize 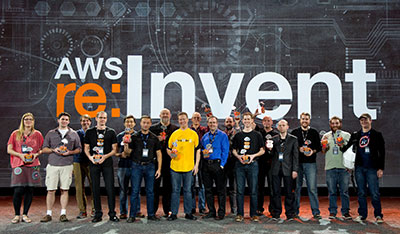 This year's AWS re:invent conference was an amazing experience. My first Game Day, some excellent and long anticipated announcements by AWS, and the Answers for AWS logo (along with my pretty face) on the keynote big screen in front of 9000 attendees, and who knows how many on the live stream. Yes, that is me standing next to Werner Vogels, CTO of Amazon.

In case you missed it, here is the keynote on Youtube:

Scroll to about 10:30 to see the NetflixOSS Cloud Prize announcements.

Our submission won Best Usability Enhancement. The motivation for the submission was easy - there is a lot of value in the NetflixOSS projects, but getting started with them is non-trivial. There are OS packages to install and configure, Java and Tomcat configurations to mess with, and then the project's .properties files to configure. Not to mention some of them require access to the AWS API.

The first step was building Ansible Playbooks to get each project up an running on a single EC2 instance easily. Then, using those playbooks along with Aminator and the Ansible Provisioner for Aminator, bake AMIs and distribute them to all regions using DistAMI. Finally, we wrote CloudFormation templates to bring up the AMI inside an AutoScaling Group, with the correct launch config, IAM role and security group.

The goal was not to build highly-available and scalable deployments, but to make it easy to try out some of the NetflixOSS components and see if you like them. More robust deployments will be coming in the future, but require dynamic CloudFormation templates tailored to your AWS account.

The other two submissions I made were for Best New Monkey - Backup Monkey which keeps EBS volume snapshots on rotation, and Graffiti Monkey which goes around tagging AWS resources (particularly useful with Cost Allocation Tagging). But then came Justin Santa Barbara with his Barrel of 12 Chaos Monkeys, which takes evil to a whole new level, and completely deserved the award for Best New Monkey.

Andrew Spyker from IBM built the Best Example Application with ACME Air, using a lot of the NetflixOSS components including Eureka, Hystrix and Karyon. The Best Portability Enhancement was won by Chris Grzegorczyk and Vic Iglesias for enabling NetflixOSS based applications to run on Eucalyptus private cloud, and proving AWS API compatibility unmatched by other private cloud competitors.

Congratulations to all of the NetflixOSS Cloud Prize winners, and thank you to Adrian Cockcroft and team for organizing it.